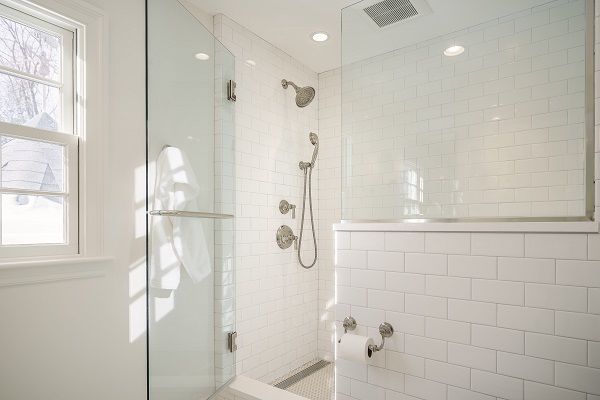 In the design world, no tile is as widely used in kitchen and bath remodels as “subway tile”. It’s beautiful because of its clean line simplicity, it’s a good value, and it works with so many styles.

Picture above is the installation of subway tile in a Wellesley children’s bath renovation where the tile extends outside the shower to extend the textural impact. This is a very classic look and is timeless in the world of colonial living. Below, a more contemporary version of a traditional running bond tile in one of our showroom vignettes. Same classic running bond install (each row evenly staggered above the next) using a tile that is different from a traditional 3×6 shape and glazed with a hand applies color giving it depth.

The original subway tile was so called because of its glossy white glazed finish and very thin grout lines used as the wall surface standard in New York City, New York subway train stations in the early 20th century. If it can hold up to a subway station then we can trust it will survive 20 plus years of living as your kitchen’s backsplash.

A rectangle is a shape that is easy for the eye to understand. Think a bit outside the box and a rectangle soon makes a nice herringbone pattern. Want a little whimsy in the rest of the bath but order to the structure of the design and a crisp white tile can look perfectly at home next to a fun penny round accent as seen in another Wellesley bath renovation.